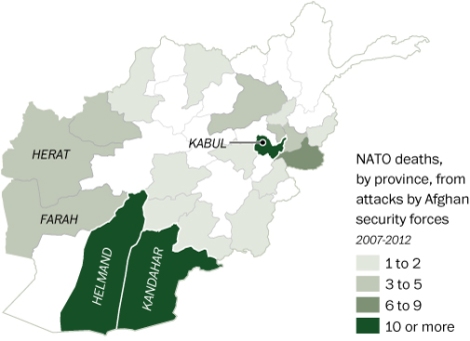 The senior commander for Special Operations forces in Afghanistan has suspended training for all new Afghan recruits until the more than 27,000 Afghan troops working with his command can be re-vetted for ties to the insurgency.

[Numerous] military guidelines were not followed — by Afghans or Americans — because of concerns that they might slow the growth of the Afghan army and police, according to NATO officials.

Special Operations officials said that the current process for vetting recruits is effective but that a lack of follow-up has allowed Afghan troops who fell under the sway of the insurgency or grew disillusioned with the Afghan government to remain in the force.

“We have a very good vetting process,” a senior Special Operations official said. “What we learned is that you just can’t take it for granted. We probably should have had a mechanism to follow up with recruits from the beginning.”